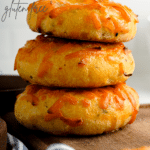 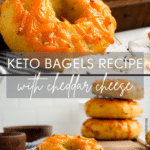 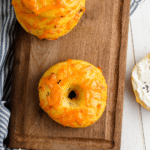 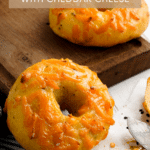 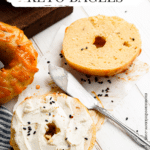 This keto bagels recipe makes the best gluten-free low carb bagels! They are chewy, dense, delicious, easy to make, and are ready in less than an hour! There is no yeast and no boiling needed.

We've gone through a bunch of changes in my house since my boys left for college. First my daughter became a vegetarian. Then she was trying to watch her carbohydrates (because when she first gave up meat, she was eating nothing but pasta and she gained a few pounds). Now she is trying to follow a keto diet.

The problem is, she absolutely loves bagels...bagels with cream cheese, bagels with butter and cinnamon, using a bagel to make a sandwich...you name it! There is a store near us that DOES sell ketogenic bagels however they want about $1.50 each for them and there was no way I way paying that!

The ingredients for this keto bagels recipe are pretty simple and chances are that you already have everything you need in your kitchen!

Despite this keto bagel recipe being mostly made with almond flour and cheese, the finished bagels will taste nothing like almonds or cheese.

You should find that the texture and flavor should be very similar to the type of bagel that you buy in the bread aisle of the grocery store. They won't have the crispy outer crust that a "true" New York-style bagel has, but if you toast them, they will have plenty of crunch.

I call this dough a "cheese dough" because I had never even heard of Fathead Dough until after I made this keto bagel recipe! I now know that Fathead Dough is a "staple" of keto recipes. This recipe is a tweak of something my daughter found on TikTok!

From everything I learned since my daughter went Keto, the entire purpose of the cream cheese (or butter) in Fathead Dough is because is helps the cheese mixture become creamy.

I found that it was plenty creamy with olive oil!

We used almond flour for his recipe because that is what we had in the kitchen. I know that many people prefer coconut flour.

If you choose to use coconut flour, you will need to reduce the amount of flour as coconut flour tends to absorb more moisture. Coconut flour also tends to make a slightly sweeter dough.

Tips for making the dough

You can either melt the mozzarella in a non-stick saucepan on the stove, or in a microwave safe bowl in the microwave.

If you don't have a food processor then you can can use a high-powered blender or a stand mixer. Just make sure to pulse (or mix) until the batter is very smooth!

I put oregano in the dough because I love oregano...but you can easily substitute your favorite spice. Onion powder or garlic powder would be a nice substitute. My daughter once added chia seeds because she wanted to up the fiber!

I chose cheddar cheese because that is what we were on the mood for that day. You can substitute everything bagel seasoning, poppy seeds, sesame seeds, etc. It's all up to you! 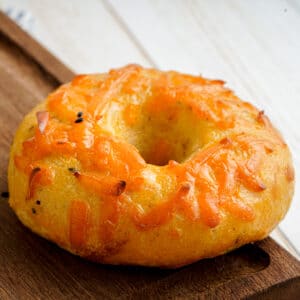 About the mozzarella cheese: 9 oz of mozzarella cheese is slightly more than 1/2 cup. When I was making these keto bagels, 1/2 cup of cheese was too little, and 2/3 of a cup was too much. If you don't have a food scale, just slightly overfill a 1/2 cup measuring cup with the cheese! Storing leftovers: these keto bagels will keep in a Ziploc bag for about 2-3 days on the counter or up to a week in the fridge Reheating: after a day or two, the bagels will be less soft. Simply reheat them in a microwave or toaster
« Roasted Beet Hummus Recipe
No Bake Chocolate Granola Bars »