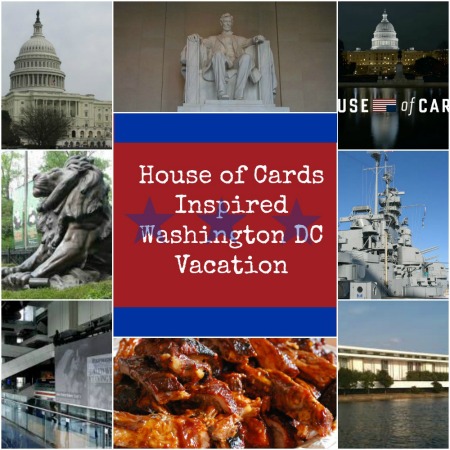 Can’t get enough of Washington DC power plays vicariously through Netflix? Even though most of the hit series was filmed in nearby Baltimore, the places that make up the show and other sites that relate to it, can be experienced. For your next vacation to the nation’s capital try this tour idea inspired by Congressman Underwood and House of Cards.

Start your day at the Lincoln Memorial, to see the famous monument that Frank is “sitting on” in promotional material. The opening scenes also feature shots of other famous monuments on and nearby the mall such as the World War II Korean War memorials.

You’ll be hungry after walking the mall so it’s time for some barbeque - just like Frank. Southeast Washington DC has a reputation for being rough around the edges but take the Metro and get off at Navy Yard or Potomac Ave and walk a few blocks to 8th St SE. Levi’s Soul Food Cafe is a small soul food diner serving great southern style meals, the kind Frank would appreciate. North Carolina BBQ, cornbread, collard greens, and mac and cheese are all on the menu. You won’t leave hungry! A few blocks south you’ll bump into the Washington DC Navy Yard. You can tour the US Navy Museum and Cold War gallery. Visitors need to enter from the 11th and O Street gate.

Grab a taxi to head back towards the Capitol. You’ll need to contact your Congress member or Representative ahead of time, but book a tour of the Capitol to see legislators in action. Alternately you can make a tour reservation through the visitor’s center. If you haven’t arranged a tour in advance you can still stop at the Capitol Visitors Center where the exhibition hall has information and exhibits on Congress and the Capitol.

If you’re ready for a snack, duck into one of the Senate office buildings and head to the basement. The dining halls are open to anyone and you can pick up something sweet or sip a cup of the famous Senate Bean Soup. From here walk down Pennsylvania Ave to 555 Pennsylvania Ave NW – home to the Newseum. There are few museums that have an entrance fee, and this is one of them – but well worth the fee. See major world events through the lens of the media in this seven level, interactive exhibits. Seventeen permanent exhibits, five theaters showing different films and documentaries, and several other traveling exhibits are on display.

Still looking to fit more into your day? You could take a walk over the Taft Bridge in Northwest DC. It’s the historic bridge in the opening credits featuring lions. You can find the same lions at the National Zoo (they were cast from the same molds). As the sun goes down, you can take in a performance at the John F Kennedy Center for the Performing Arts. You never know who you’ll end up rubbing shoulders with.

« Companion Planting | What NOT To Plant Together
Stockpiling is a Waste of Money and a Sign of Greed? »