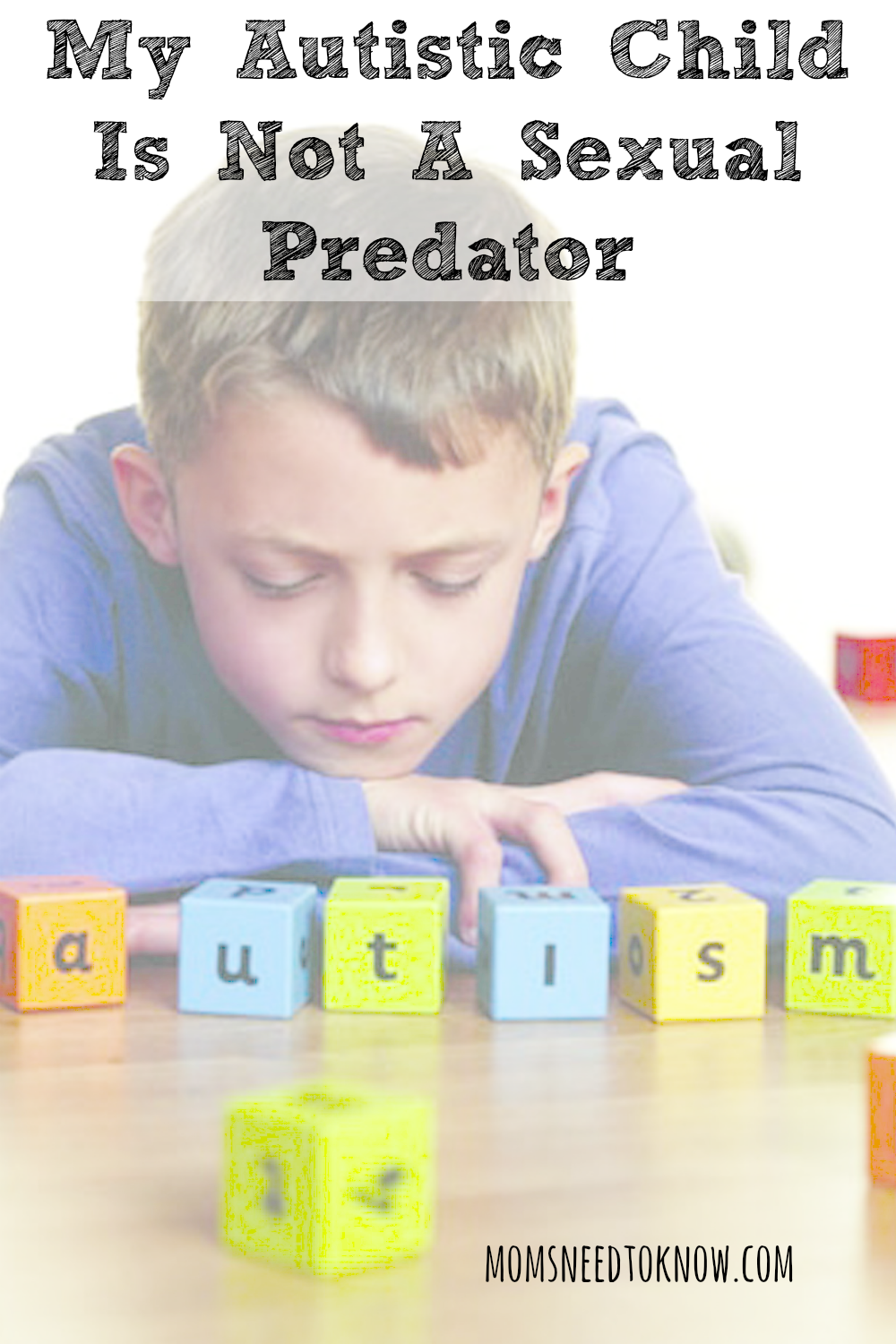 Sometimes, I wish that my son had a physical disability, instead of a neurological one.

Because when you see someone in a wheelchair, or on crutches, most people don't worry that they are going to rape or molest their child.

But that isn't the case with children with neurological problems (AKA - on the Autism Spectrum).  They are "weird" and "quirky"...and we need to make sure that they aren't going to harm anyone.

You know what is fun?  Lying to your 9-year old daughter that the reason that her best friends can't have a sleepover at our house is because of "scheduling" (for 2 straight years)...and not because her BFF's father thinks that her brother is going to abuse her friends.

And then your daughter overhears you ranting to your husband (she was supposed to be watching Minecraft videos on her iPad with headphones at the time) about said neighbor, and she says to you "Mommy - what if M and A and I barricade ourselves in my room - can we have a sleepover then?"

Of course, the answer is still no - because I am such a bad parent that I wouldn't notice my son breaking down a door to molest 3 girls...EVEN IF he was going to do that in the first place (which he wouldn't).

Seriously - sometimes I think it would be easier if my son would just be full-blown "Rain Man" autistic....because then MAYBE I could understand the fears about that (not that they would be justified - just saying....) .

Look - I get that my oldest son has "issues".  He can be "strange" and he sometimes flaps his hands or walks on his toes and he has very few of the social (and, I guess, "cool") traits of your typical 14-year old.

But he is a friggin' mathematical genius, has a photographic memory, perfect pitch (according to his Choral Director) and is one of the most generous, amazing, kind, funny and Godly boys I know (and yes - I am comparing him to my other son...who I love equally)

But he isn't considered "cool" by most standards.

And he isn't dying to molest your daughter, no matter how "uncool" he is. As a matter of fact, studies show that he is more likely to be a target of molestation, than to be the one doing the raping!

I am fucking tired of this stereotype!

I (sorta) dealt with this recently.  Halloween night, being a Saturday, the adults in the neighborhood planned to meet at a backyard fire pit for "adult beverages".  I had a very-rare headache and decided to just go to bed at the last minute.

And as usual, I walked my dog before going to bed.

Imagine my delight that, as I was walking my dog past that neighbor's house, I heard them telling other neighbors their unfounded fears about my son. So now they are not only insulting me and my son personally, they are slandering me/my son to my neighbors.

When I walked in to my house from walking the dog, I made sure to slam the door "extra loud" so that they would know that I heard them (we are talking 500 feet away here). Five minutes later, I went to their house and brought my daughter home (because she was having a sleepover at their house - and it was clear that they knew I overheard them talking - because why else would I wake my daughter up at 11:30pm at their house to bring her home?).

What I regret most is not dealing with it in the moment. I should have walked in to that yard (I was invited) and said "What the F are you saying about my son?".

Because since Halloween, I have been immensely pissed at both the father (who thinks that my son is going to rape his daughters) AND the Mother (for not standing up to her husband, because she has  agreed with me that her husband is being irrational) and have pretty much refused to talk to them besides the times I "have to" (there are a few before-school activity carpools that we do)

And I hate it...because I really enjoyed the relationship that I had with these people in the past.(well - the mother most of all - the father was just a peripheral friend)

Before I heard the father telling other people in the neighborhood that my son was a potential rapist, I figured I could eventually "wear him down" and my daughter could finally have the sleepover at our house that she wanted with her BFFs, despite his unfounded fears

But once he started telling others, all bets were off.

There have been a few overtures from the mother since that night.  Almost a plea to get back to normalcy without discussing the underlying problem.

I don't have many female "real life" friends - so this was a relationship that I cared about deeply and wanted to continue - because our daughters were BFFs, we live right next to each other, we genuinely like each other...so YEAH!

Because my son is not dying to rape your daughter - no matter how quirky he is!

And I am not going to accept you silently accepting your husbands irrational fears under the guise of "what are you going to do?"

I can't imagine a world where, if my husband was being an irrational prick, I wouldn't say to him "Get over it!".

I am taking a stand for my son - because he is weird, but awesome!