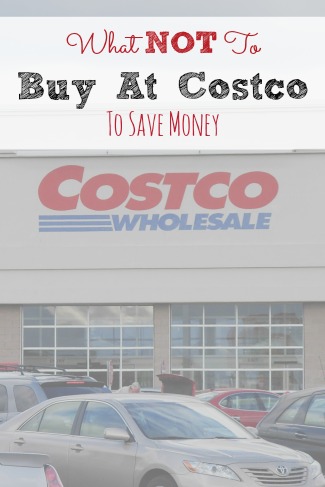 How many times have you walked out of Costco spending WAY more than you intended to spend? If you are honest with yourself, you will say "more than a few times"! It is so easy to overspend at Costco. You walk in to the store just intending to buy a rack of ribs and some muffins and you walk out after spending $300!

If you are getting great deals and can afford to spend the money, then that is fine. However, if you got sucked in by a tasting stand or an impulse buy and ended up spending a fortune...then that is a problem.

As I said in my "What To Buy at Costco" post, we are conditioned to think buying in bulk will save you money but the truth is, Costco is a business too and they need to make a profit. With that in mind, you need to know that some items at Costco just aren't that great of a deal and you should buy elsewhere!

Now - before you say "I shop at Costco because I don't want to have to worry about coupons", let me tell you this: If you simply watch the sales at the grocery stores and stock up whenever there is a good deal and never use a single coupon, you will STILL save money over buying certain items at Costco!

So without further ado, here are the items that you should never buy at Costco:

Soda/pop - while soda prices vary around the country, as a general rule, you should never buy your soda at Costco. I know that, compared to the everyday price of soda in the grocery stores (typically $5 for a 12-pack), Costco prices are pretty good. BUT - you need to keep in mind that soda goes on sale almost every week at grocery stores. During the summer months, I see it as low as $2.25 for a 12-pack, but you can usually get the soda you like (Coke vs. Pepsi) for about $2.50 for a 12-pack about once a month. That is much cheaper than the $10 for a 36-pack at Costco! Simply stock up when it goes on sale and you will save money!

Cereal - even without using coupons, if you just shop the sales and stock up at a good price (not even a great price...just a good price) you will STILL save money on cereal if you take advantage of the drug store and grocery deals!

Bread - check the sales in your area because you can usually always get bread much cheaper at the stores. The one exception to this is gluten-free bread. I have found that the twin packs of Udi's gluten-free breads are a fabulous deal at Costco (more on me going Gluten Free coming soon) !

Toiletries- I have shown you time and time again how you can get free-to-almost free deodorant, toothbrushes, toothpaste, hair care and more at the drug stores.  Some weeks you don't even need to use coupons to do it.

Boneless Skinless Chicken Breasts - this is the protein that we eat the most in my house and I tend to be quite psychotic about it.  If you live near a Wegmans, the price on a similar-sized package is $1.99 per pound every day of the week.  Compare that to the $2.99 per pound price at Costco!  The Costco price is STILL better than the non-sale price at most grocery stores...but just watch the sales at your store because you can often get it cheaper!

Dried Spices - unless you will use up that huge bottle of Oregano within a year, you are better off buying them in smaller quantities.  Dried spices only have a shelf life of about a year and, while they don't "go bad", they will lose most of  their flavor after that.  A better solution? Grow your own herb garden in the summer and freeze the herbs to get you through the winter!

Like I said, Costco does have some great prices and there ARE certain things that you should be buying at Costco.  I just want you to be careful and not overpay for others!

Do you have any other products to add to the list?